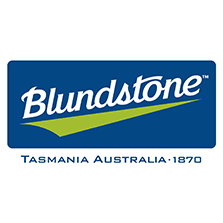 Since 1870, Blundstone has made the toughest, no-nonsense footwear for work and play.

A true Tasmanian company since the very beginning, Blundstone holds quality, comfort at the heart of the company. Despite becoming one of the world’s most recognisable boot brands, the company still remains Tasmanian to its core.

Over their 150 years Blundstone boots have been worn by Soldiers (their boots were worn by the Australian Army in both World Wars), on Everest Expeditions, the Police, Footballers, Pop Stars, gardeners, factory workers and pretty much everyone in between. Founded by John Blundstone the company began by importing boots from England before they started making their own boots with locally sourced leathers and materials. Over the years they made boots for everyone in Tasmania, children, women, men and all the associated pursuits they had at the time. During the Great Australian Depression the company was taken over by the Cuthbertsons who owned another local leather and tanning company. The Cuthbertsons still own and control the business today.

While most people will know the Blundstone name for the 500 range many of their styles of boots have been coveted, not just that range. In the Second World War the boots they made for the Australian Armed forces were the subject of envy from US troops, many trading their own boots and more for a pair.

The 500 range of boots came to be in the 1960s. Originally designed as a multi purpose work boot they are still worn as such (safety features are incorporated in many of the range) but they have also been adopted as an everyday wear item.The simple, yet elegant, design makes it easy to wear in most circumstances, while its hard wearing nature means it will take pretty much anything you throw at it. Over the years it has become a staple and a classic.

Worn around the world, Blundstone boots carry their heritage while adapting to a world of circumstances making them an easy choice. 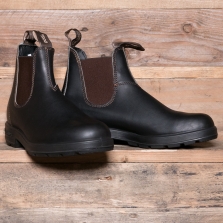 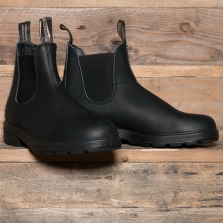 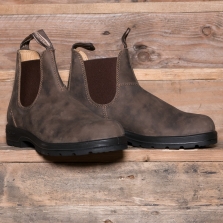