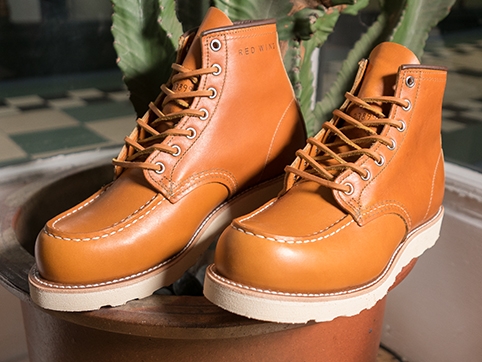 The new limited series Irish Setter from Red Wing appears as if out of a time machine from 1952. In addition to its matched color, which they're now calling “Gold Russet Sequoia”, the boot has all the exacting details of its historic forebear. The “Red Wing” name is embossed on the inside quarter of the boot, the moc toe is finished with a distinctive rectangular bar-tack stitch, and the backstay chain-stitch is once again done on our ancient Puritan Stitch machine, which has its origins in the 1890s. Using the same mahogany and sage thread of the original, the top band is double-stitched, and the laces are leather instead of Taslan. All of these features are subtle differences from their standard No. 877 Classic Work Boot but they add up to an Irish Setter that is both unique and true to its name. Finally, to finish it off, Red Wing have added the traditional woven “Irish Setter” label inside the tongue and the boots come in a box that features the original logo and text from the 1950s.

While the limited series Irish Setter boots will no doubt be coveted by collectors who want a piece of history, these are Red Wing boots after all, built for a lifetime of service. Like the faithful dog for which they’re named, they’ll come out of the box eager to head into the woods when the leaves start to fall in autumn, not afraid to get dirty. And we’d have it no other way.